Home
MenoFem In the Press 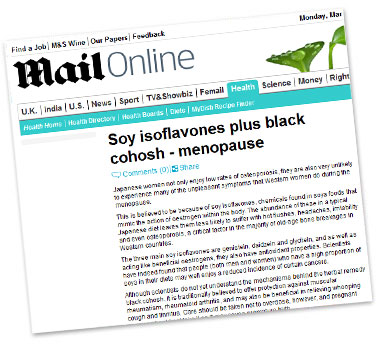 Japanese women not only enjoy low rates of osteoporosis, they are also very unlikely to experience many of the unpleasant symptoms that Western women do during the menopause.

This is believed to be because of soy isoflavones, chemicals found in soya foods that mimic the action of oestrogen within the body. The abundance of these in a typical Japanese diet leaves them less likely to suffer with hot flushes, headaches, irritability and even osteoporosis, a critical factor in the majority of old-age bone breakages in Western countries.

The three main soy isoflavones are genistein, daidzein and glycitein, and as well as acting like beneficial oestrogens, they also have antioxidant properties. Scientists have indeed found that people (both men and women) who have a high proportion of soya in their diets may well enjoy a reduced incidence of certain cancers.

Simple liquorice pill that takes the misery out of the menopause 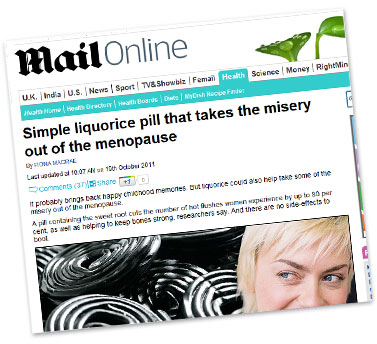 It probably brings back happy childhood memories. But liquorice could also help take some of the misery out of the menopause.

A pill containing the sweet root cuts the number of hot flushes women experience by up to 80 per cent, as well as helping to keep bones strong, researchers say. And there are no side-effects to boot.

The pill produced 'remarkable' results when taken daily by women who were close to or going through 'the change', the scientists insist.

This is thought to be because plant chemicals in liquorice have a similar effect to the female sex hormone oestrogen, levels of which plummet around the menopause. A U.S. fertility conference heard that in future, liquorice-based supplements could provide women who cannot or will not take traditional, oestrogen-based hormone replacement therapy with an effective alternative.

The oestrogen in the pills, patches and implants used by up to one million British women can cause headaches, dizziness, stomach cramps and nausea.

In addition, fears that HRT raises the risk of breast cancer and heart problems have refused to go away.

The researchers, from the University of Southern California, gave supplies of liquorice extract called licogen or a placebo pill to 51 women who were going through or who were close to the menopause.

The volunteers, who had an average age of 51, took a pill once a day for a year. They also kept diaries to note their symptoms. It took eight months for the women to see any improvement. But within a year, most of those taking the liquorice found that the number of hot flushes and night sweats they had each day fell by 80 per cent ? or from an average of ten to just two. And instead of waking an average of four times, their sleep was disturbed just once or twice, the American Society for Reproductive Medicine's annual conference heard.

Hot flushes and night sweats affect most women in the years leading up to and after their last period.

Most women are bothered by them for four years, but they can disturb sleep, zap energy, cause embarrassment and reduce quality of life for up to 20 years.

Researcher Donna Shoupe said: 'Women really felt it worked and made a difference.'

The liquorice also seemed to slow the thinning of bones that comes with age. Unfortunately, eating it as a sweet rather than as a concentrated supplement is unlikely to do much. The researchers were funded by a liquorice company but carried out the study independently. They added that HRT should still be a woman's first choice.

David Sturdee, president-elect of the International Menopause Society, said the numbers involved in the study were too small to be sure the liquorice had any effect.

But he added: 'Anything that we can get that is non-hormonal and would be useful as an alternative to HRT? must be welcomed.' 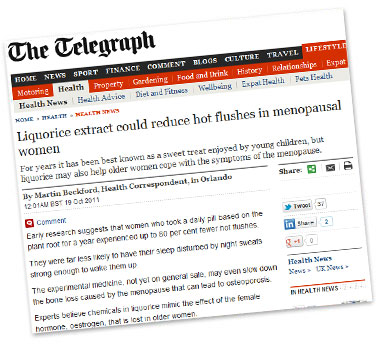 Early research suggests that women who took a daily pill based on the plant root for a year experienced up to 80 per cent fewer hot flushes.

They were far less likely to have their sleep disturbed by night sweats strong enough to wake them up.

The experimental medicine, not yet on general sale, may even slow down the bone loss caused by the menopause that can lead to osteoporosis.

Experts believe chemicals in liquorice mimic the effect of the female hormone, oestrogen, that is lost in older women.

It could prove a cheap, safe and natural alternative to Hormone Replacement Therapy that is not suitable for all women particularly pensioners.

Dr Marsha Baker from the University of Southern California, who presented a paper on the study at the annual conference of the American Society for Reproductive Medicine in Florida on Monday, said: "We are not going to draw any definitive conclusions from this but even though it's preliminary it's still promising information that we can use to direct some further, larger-scale studies."

Dr Donna Shoupe from the University of Southern California, who led the study, said: "There was a pretty significant reduction in hot flushes on the study.

"Hot flushes actually disrupt your life, they're bothersome. We looked at wake episodes at night, that was decreased also. When you have a hot flush at night it actually wakes you up.

"So if it wakes them up they're tired so impact on sleep is a very important aspect of it."

Most women go through the menopause in middle age as they cease to be fertile.

But as their ovaries stop producing hormones it leads to painful side-effects that reduce quality of life, such as hot flushes, lack of sleep, headaches and mood changes.

The standard treatment is HRT, which replaces the hormones oestrogen and progesterone, but some doctors are reluctant to prescribe it after a contentious study claimed it increases risk of breast cancer and heart disease. Women over 60 are thought in particular to be at higher risk.

In an attempt to see if a natural alternative could help alleviate symptoms, researchers recruited 51 women with an average age of 50.8 who had moderate symptoms, experiencing about 10 hot flushes every day.

They were either given 50mg or 100mg of a liquorice root extract called licogen in a daily tablet, or a dummy pill, and followed for a year.

The results showed an effect after eight months, with hot flushes falling by up to 80 per cent, including in some cases down to just one at night from four.

In addition analysis suggests the liquorice extract had reduced levels of bone turnover, by between a third to half, which Dr Shoupe said she was "pretty thrilled about".

It is believed that the treatment works by binding to oestrogen receptors so it makes the body thinks it has more of the hormone.

However the researchers admit the study, funded by an Israeli liquorice manufacturer but carried out independently, was small and that the fall in hot flushes for those on the drug did not differ significantly from those given a placebo.

David Sturdee, president-elect of the International Menopause Society, said the numbers involved in the study were too small to be sure the liquorice had any effect.

But he added: "It is interesting and anything that we can get that is non-hormonal and would be useful as an alternative to HRT for those who can't take HRT must be welcomed."