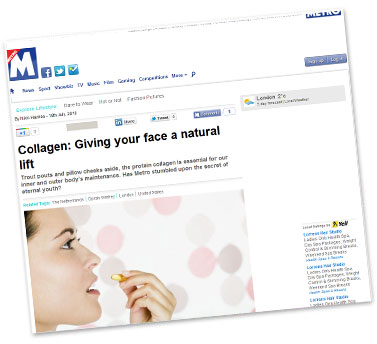 Many Japanese trends could politely be described as quirky ? who knows why the grass-growing loo seat or the dumbbell-cum-phone didn't catch on? However, the latest craze from the Far East is more mainstream ? there, at least.

In the land of the rising sun, collagen, the connective protein that holds muscle tissue together, is added to just about everything, from bath gel to yoghurt. It's even crept on to restaurant menus in recent years: innocuous-looking hotpots containing melting cubes of the translucent, tasteless, jelly-like substance, and ingredients naturally rich in collagen such as pig's trotters, chicken skin and, controversially, shark fin, are must-have lunch options for beauty-conscious women.

It's taken the West a while to develop an appetite for the idea but, with Oprah Winfrey talking up a powdered collagen drink on her show in 2008 and Yo! Sushi's Market Place branch in London adding a collagen drink to its menu this summer, we could finally be entering the era of the trotter.

Collagen supplements are becoming popular too. But what's the secret of this so-called wonder protein?

"Collagen accounts for 30 to 45 per cent of the body's protein...It's the essential structural component of all connective tissue and makes up approximately 75 per cent of the body's skin tissue. As a result, the depletion of collagen within the skin is thought to lead to the formation of wrinkles and the appearance of ageing." -Nutritionist Kate Butler

Choosing the correct supplement is critical ? one that also contains collagen-building ingredients such as amino acids, lysine, proline and Vitamin C, or one containing 'hydrolysed' collagen, which can be rapidly absorbed by the intestinal tract. 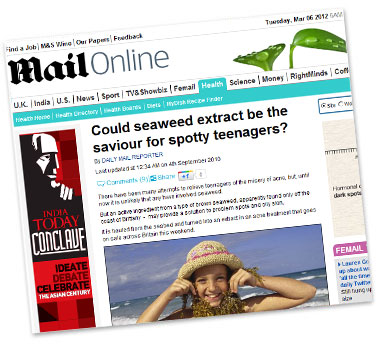 Could seaweed extract be the saviour for spotty teenagers?

There have been many attempts to relieve teenagers of the misery of acne, but, until now it is unlikely that any have involved seaweed.

But an active ingredient from a type of brown seaweed, apparently found only off the coast of Brittany - may provide a solution to problem spots and oily skin. It is hauled from the seabed and turned into an extract in an acne treatment that goes on sale across Britain this weekend.

Clinical trials have shown that the seaweed extract cream had a significant and positive impact.

It said that in a trial of 60 males aged 12 to 24 with mild acne, the products containing seaweed extract were significantly more effective than a dummy face wash, scrub or gel.

They cut the number of spots and problems areas as well as curbing inflammation and redness, with improvement showing within 14 days.

Professor Enzo Berardesca, a director at the Instituto Dermatolgico San Gallicano, Italy, who supervised the trial, said the results were 'extremely good'. He added: 'Patients with mild to moderate acne, such as blackheads, whiteheads, and skin redness, found their symptoms markedly reduced.'

Most importantly, he said, there were no side effects. 'People will probably like using this because it comes from a natural source and is not a chemical.' 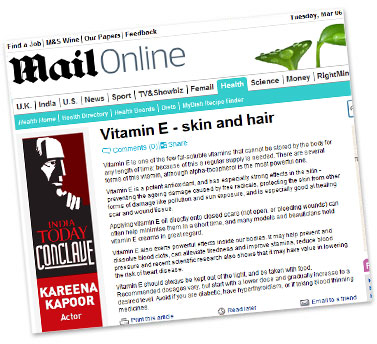 Vitamin E is one of the few fat-soluble vitamins that cannot be stored by the body for any length of time; because of this a regular supply is needed. There are several forms of this vitamin, although alpha-tocopherol is the most powerful one.

Vitamin E is a potent antioxidant, and has especially strong effects in the skin - preventing the ageing damage caused by free radicals, protecting the skin from other forms of damage like pollution and sun exposure, and is especially good at healing scar and wound tissue.

Applying vitamin E oil directly onto closed scars (not open or bleeding wounds) can often help minimise them in a short time, and many models and beauticians hold vitamin E creams in great regard.

Vitamin E also exerts powerful effects inside our bodies. It may help prevent and dissolve blood clots, can alleviate tiredness and improve stamina, reduce blood pressure and recent scientific research also shows that it may have value in lowering the risk of heart disease.

'A new miracle serum may be the alternative to breast surgery'

The bust serum uses an ingredient called mangosteen, taken from the skin of the fruit, to prompt the production fatty acids in the breast tissue. It also ?plumps up' and enlarges the fat cells which already exist to more than 100 times their size.

The serum differs from rival collagen-boosting creams, which tend to target the skin around the bust ? rather than the fat stores under the skin ? to lift and plump up the breasts.

In independent trials on 6,000 women, two-thirds of women saw an increase of half a cup size after 12 weeks, while almost a quarter went up by three-quarters of a cup size.

Tests by dermatological scientists found the Bust Fix increased the production of fatty acids, a process known as lipogenesis, by 57 per cent in five hours.

The cream also uses plant ingredients such as green algae and quince-hydrogel to firm and lift the breasts. During trials, 85 per cent of women agreed that it ?visibly plumped, smoothed and firmed the skin' around the bust and neckline.