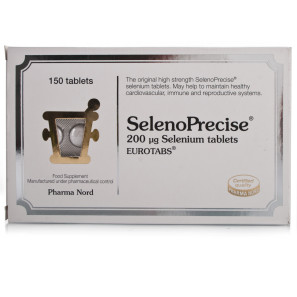 Be the first to write a review

Pharma Nord Selenoprecise contains Selenium which helps to maintain a healthy immune system, which is important in resistance to infectious bacteria and viruses, as well as cancer cells.

Pharma Nord Selenoprecise - Selenium is an essential trace element of fundamental importance to human health. The most abundant sources of selenium are Brazil nuts, seafood, meat and poultry People at risk of selenium deficiency include those with a restricted food intake (slimmers, vegetarians, the elderly), pregnant and lactating women, and those living in geographical regions with selenium depleted soils. It is recognized that soils in many areas of the world, including the UK, are deficient in selenium, often as a result of continual or intensive farming. This deficiency is manifest upwards through the food chain via plants and animals, culminating in man. A good example of this is Keshan disease, an endemic cardiomyopathy resulting from severely selenium depleted soil in the Keshan region of China-a problem that was eventually eliminated by the addition of a selenium supplement to dietary salt.

In Scandinavian countries, selenium is added to agricultural fertilizers to increase depleted soil selenium levels, resulting in an increase in population average selenium intake from 30 to 90 microgm/day. Dietary selenium always occurs in an organic form (i.e. bound to an amino acid such as methionine or cysteine), whereas selenium in supplements may be organic or inorganic in form. The absorption of organic selenium (selenomethionine, selenocysteine) is generally more efficient than for inorganic selenium (e.g. sodium selenite), and the absorption of organic forms of selenium is not reduced by concurrent intake of vitamin C. Selenium levels are depleted by smoking or drinking alcohol.

What does Selenium do?

Selenium is an essential component of the key antioxidant enzyme glutathione peroxidase, which acts in concert with other types of antioxidants (particularly vitamin E) to protect the body from the effects of damaging free radicals. Selenium plays important roles in the control of normal thyroid hormone metabolism, and in maintaining fertility by promoting sperm motility.

Selenium also helps to protect the body from the toxic effects of heavy metals such as mercury. Deficiencies of selenium or zinc have been identified as important factors in promoting the growth of Candida species, as a consequence of the adverse effects of such deficiencies on immune function and thyroid/adrenal hormone metabolism.

What does Selenium do in relation to Oral health?

Selenium helps to protect the body from the toxic effects of heavy metals such as mercury from amalgam fillings. Amalgam fillings release mercury vapour which is absorbed into the bloodstream with potentially harmful effects. Selenium binds to heavy metals rendering them harmless. British diets are very low in minerals and antioxidants, in particular selenium. The basis for our natural defence mechanisms may be too weak and so make mercury poisoning even more dangerous. This is why it is advisable to take measures to deal directly with the problem of amalgam fillings and ensure that our diets contain sufficient selenium and antioxidants

How much Selenium should you take?

Are there adverse effects from taking Selenium?

Toxic effects due to excessive selenium intake occur at doses greater than 900 microgm/day, typically manifesting initially as loss of hair and nails. There are no reported drug interactions with selenium.

Seleno-Precise is a selenium-yeast mono-preparation containing 200 micrograms of highly absorbable organic selenium per tablet, with the advantage of being manufacturable in a particularly reproducible manner.

The views expressed are those of our customers. If you require advice on a condition or treatment, please contact your doctor or pharmacist. For any questions regarding the products, please contact us. Please note: due to advertising regulations, not all product reviews can be displayed. Please be advised that people respond to products differently and you should always read the label.