Home
Medigrey - TRP-2 In The News 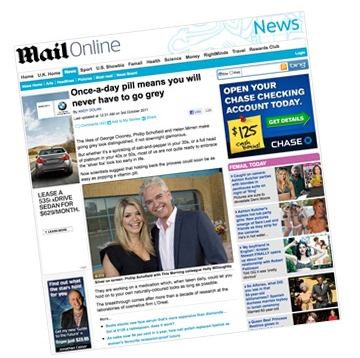 But whether it 's a sprinkling of salt-and-pepper in your 30s, or a full head of platinum in your 40s or 50s, most of us are not quite ready to embrace the ?silver fox ? look too early in life.

Now scientists suggest that holding back the process could soon be as easy as popping a vitamin pill. They are working on a medication which, when taken daily, could let you hold on to your own naturally-coloured locks as long as possible.

Based on a secret fruit extract, the pill would be inexpensive and designed to be used in the same way as a daily dietary supplement. The pill would work by offering protection against this process.

Hair pigment cells die with age due to the lack of a protective enzyme called tyrosinase-related protein 2 (TRP-2).

Rather than creating a synthetic drug to mimic TRP-2, the scientists instead screened thousands of naturally occurring compounds, and eventually found one in a fruit.

Researchers have developed a new treatment which protects the cells that provide hair with its pigment, allowing people to keep their natural colour for longer. While actors such as George Clooney, Meryl Streep and Dame Judi Dench have chosen to live with their grey, hundreds of thousands of people in Britain still chose to hide theirs.

The new treatment works by mimicking an enzyme which can protect the stem cells which produce pigment in hair follicles. Eventually researchers hope they may be able to help people whose hair has already turned grey by replenishing the supply of pigment-producing stem cells altogether.

"The stem cells in the hair follicle are more fragile than those found in the skin, but this has opened up an opportunity that I believe we can use to prevent hair whitening."

Hair grows from hair follicles in three to four year cycles. At the end of each cycle, the hair follicle is regenerated from stem cells which lead to a new growth of a hair. The colour of each hair is determined by cells known as melanocytes which produce the pigments that colour hair. Their numbers are kept topped up by a pool of melanocyte stem cells in the hair follicle.

Over time the pool of these stem cells declines and so they are unable to refresh the pigment producing cells after each cycle, meaning hair turns grey and then white because it lacks pigment. They have discovered that while melanocyte stem cells in the skin, which does not lose its colour with age, have a crucial enzyme called TRP-2, this enzyme is missing in the hair follicle stem cells.

They found that TRP-2 acts to protect the melanocyte stem cells from damage and so help them to last longer. They have now developed treatments that mimic the effect of TRP-2 and can be applied to hair follicles to help maintain a healthy population of melanocyte stem cells and allow hair to retain its colour for longer.

Pills That Keep You Youthful

If taking a pill every day meant your hair would retain its natural colour would you do it?

It sounds futuristic but this week scientists reported that preventing your hair turning grey may soon be as easy as popping a daily vitamin pill.

Researchers found that hair pigment cells die as levels of an enzyme known as TRP-2 drop with age but they discovered that some of these cells, called melanocytes, survive even when someone?s hair has turned grey. After finding a compound that occurs naturally in an unnamed fruit scientists developed it into a pill form.

Not quite ready to embrace the silver siren looks of Helen Mirren? Well, according to new reports you may not have to...

The beauty giants have spent more than a decade in research labs trying to find a way to halt the oncoming of salt and pepper locks, and it appears that they've finally made a breakthrough.They are currently working on a medication that, taken daily, could help you retain your natural hair for as long as possible.

Aiming to avoid a synthetically created drug, the scientists involved in the development process painstakingly screened a vast number of naturally occurring compounds, eventually discovering one in fruit.

What we do know is the pill would be inexpensive and designed to be taken in the same way as a dietary supplement.