Home
GojiMax - In The Press 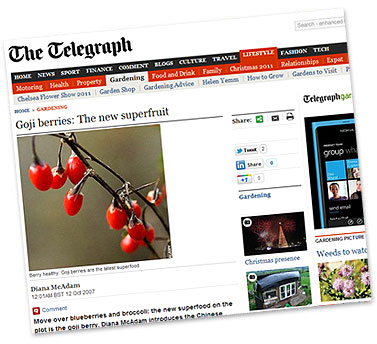 Some foods - such as the fruit of Lycium barbarum, known as goji berries - pack a harder than average nutritional punch.

This fruit, which is about 2cm (1in) in diameter with a mild, sweet liquorice flavour, has recently been rated No 1 on the ORAC scale (Oxygen Radical Absorbance Capacity) by the US Department of Agriculture. The scale was developed to measure the antioxidant level in foods and, the higher the score, the more capable that food is of destroying the free radicals that cause cancer and speed up the aging process.

Goji berries scored a spectacular 25,300 per 100g, while prunes, which came second, had a mere 5,770 per 100g. According to Gillian McKeith, the presenter of Channel 4's You Are What You Eat, they have 2,000 more antioxidants and 500 times the amount of vitamin C per weight as oranges. They also contain beta-carotene (their ability to improve vision has been documented for more than 1,500 years in China), vitamins B1 and B2, minerals and amino acids. Goji berries and lycium bark play important roles in traditional Chinese medicine and are believed, among other things, to strengthen the immune system, help eyesight, protect the liver, boost the sperm count and improve circulation.

Another traditional property of goji fruit is their ability to benefit the complexion and it is also claimed that they enhance longevity (a Chinaman, Li Quing Yuen, who ate them every day, is said to have lived to the age of 250).

Most of the goji berries that are sold in this country are cultivated in China, but they also grow in Mongolia and on vines in the sheltered Himalayan valleys of Tibet and Nepal, where they have been eaten for centuries and are nicknamed "happy berries" because of the sense of wellbeing they are said to induce. 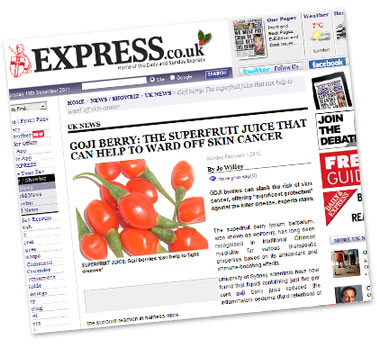 Goji Berry: The superfruit juice that can help ward off skin cancer

The superfruit berry lycium barbarum, also known as wolfberry, has long been recognised in traditional Chinese medicine for various therapeutic properties based on its antioxidant and immune-boosting effects.

The bitter berries contain powerful antioxidants which mop up free radicals in the body ? linked to disease and signs of ageing.

Scientists compared the effects of Himalayan Goji Juice, containing 89 per cent of the juice and eight per cent other fruit juices added for flavour ? grape, pear, apple and pear puree ? with those of JustJuice apple and pear from Woolworths.

The fruit juices were diluted with pre-boiled and cooled tap water and offered to the mice freshly prepared every day. Mice not given goji juice had a marked sunburn inflammatory reaction over the following 48 hours. But mice drinking goji berry juice were found to have a significantly reduced oedema at each measurement point until 48 hours, according to the study published in the Royal Society of Chemistry's journal Photochemical and Photobiological Sciences. The inflammatory sunburn reaction was strongly reduced.

The goji berry ? endorsed by Kate Moss and Sir Mick Jagger ? has a long history of health benefits that ?nourish the blood and enrich the yin? in Chinese medicine dating back to the 7th century Tang dynasty.

Skin cancer is the most common type of the disease among young people in the UK and kills around 2,000 people a year ? more than in Australia. About 10,000 new cases of malignant melanoma are recorded annually and rates have quadrupled in the past 30 years. Although skin cancer is easily treated when caught early, it usually becomes fatal if it spreads to other parts of the body. Dr Vivienne Reeve, of the University of Sydney, said: "Goji berry juice might prove useful in preventing skin cancer development in susceptible humans."

But Dr Alison Ross, of Cancer Research UK, said: "This study in mice does not provide evidence that drinking goji berry juice can offer any protection against the skin-damaging effects of excessive sun exposure in people."