Home
EyeMax - In the Press 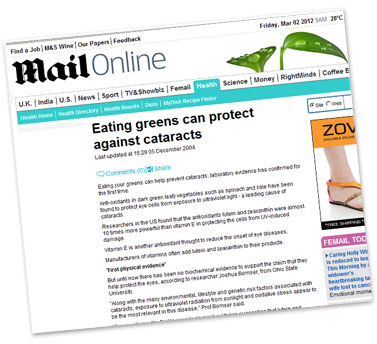 Eating greens can protect against cataracts

Eating your greens can help prevent cataracts, laboratory evidence has confirmed for the first time. Anti-oxidants in dark green leafy vegetables such as spinach and kale have been found to protect eye cells from exposure to ultraviolet light - a leading cause of cataracts. Researchers in the US found that the antioxidants lutein and zeaxanthin were almost 10 times more powerful than vitamin E in protecting the cells from UV-induced damage. Vitamin E is another antioxidant thought to reduce the onset of eye diseases. Manufacturers of vitamins often add lutein and zeaxanthin to their products.

But until now there has been no biochemical evidence to support the claim that they help protect the eyes, according to researcher Joshua Bomser, from Ohio State University.

"Along with the many environmental, lifestyle and genetic risk factors associated with cataracts, exposure to ultraviolet radiation from sunlight and oxidative stress appear to be the most relevant in this disease," Prof Bomser said.

"Our results are the first to provide physical evidence suggesting that lutein and zeaxanthin decrease damage caused by ultraviolet radiation."

Cataracts cause the lens of the eye to cloud over and can lead to serious problems with vision. It is estimated that around 71% of over-85s have a cataract bad enough to affect their sight, with women more commonly affected than men. In the latest study, published in the Journal of Nutrition, the researchers treated human eye lens cells with different concentrations of lutein, zeaxanthin or vitamin E.

Along with a batch of untreated cells, these were exposed to doses of ultraviolet beta radiation for 10 seconds.

UVB radiation is also thought to be the main environmental culprit in causing skin cancer as well as cataracts.Prof Bomser said the dose of UVB radiation they used was about the same amount a person would receive when they get a mild tan. Adding lutein and zeaxanthin to the cell cultures provided double the protection from UVB damage compared with vitamin E. 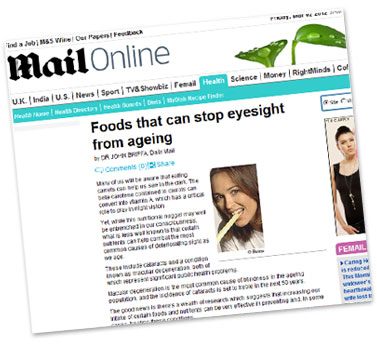 Foods that can stop eyesight from ageing

Many of us will be aware that eating carrots can help us see in the dark. The beta-carotene contained in carrots can convert into vitamin A, which has a critical role to play in night vision.Yet, while this nutritional nugget may well be entrenched in our consciousness, what is less well known is that certain nutrients can help combat the most common causes of deteriorating sight as we age.These include cataracts and a condition known as macular degeneration, both of which represent significant public health problems.

Macular degeneration is the most common cause of blindness in the ageing population, and the incidence of cataracts is set to treble in the next 50 years. The good news is there's a wealth of research which suggests that increasing our intake of certain foods and nutrients can be very effective in preventing and, in some cases, treating these conditions.

As we age, the macula can become damaged, giving rise to a condition known as age-related macular degeneration (AMD). AMD affects about one in five individuals over the age of 65, and is the most common cause of loss of vision in this age group.

While the cause of AMD is generally poorly understood, there is good evidence that it is related to destructive molecules known as free radicals. More importantly, there are many studies which show that upping our intake of antioxidants (compounds which help neutralise free radicals in the body) may help to prevent or control this condition.

The antioxidants which appear to have most impact in this respect are a class of compounds known as the carotenoids. The carotenoids include beta-carotene and its other less well-known relatives, lutein (pronounced loo-teen) and zeaxanthin (pronounced zee-a-zanthin).

The carotenoids are found most abundantly in dark green and orange-yellow vegetables such as carrots, spinach, broccoli and squash. More than one study has found an association between a high consumption of these foods and protection from AMD.