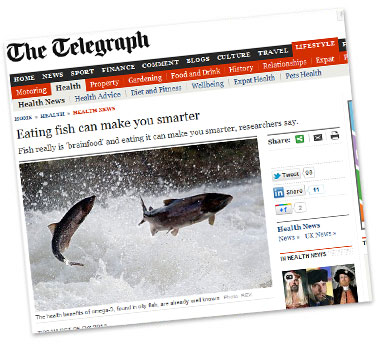 Eating fish can make you smarter

Scientists discovered that eating food rich in omega-3 boosted blood flow to the brain and improved its performance during mental tasks. The findings could have implications for treating dementia.

The health benefits of omega-3, found in oily fish, are already well known.

New research now claims it can also improve reaction times, as well as reducing levels of tiredness in the brain after performing tough tasks. And the British researchers say the findings could be particularly important for older people, with a diet rich in omega-3 having the potential to stave off dementia.They conducted two studies to investigate the effects of oily fish. Volunteers were given fish-oil supplements rich in DHA, an omega-3 fatty acid.

Results of one showed that taking omega-3 supplements during mental tasks boosted blood flow to active areas of the brain. Another study looked at the impact of giving two fish-oil supplements to a group of volunteers aged 18-35 over three months.Results, published in the British Journal of Nutrition, showed little difference in blood flow to the brain, but faster reaction times and lower levels of tiredness after being given a task to complete.

Researchers now want to conduct a study in people aged 50-70 to see how taking fish-oil supplements could affect their memories, mental performance and blood flow to the brain.

Study author Dr Philippa Jackson said: "These findings could have implications for mental function later on in life?This is because evidence suggests regularly eating oily fish or taking omega-3 supplements may prevent cognitive decline and dementia, and increased blood flow to the brain may be a mechanism by which this occurs...If we can pinpoint both the behavioural and brain blood flow effects of this fatty acid in older healthy people, then the benefits for those with mental degenerative conditions associated with normal aging could be that much greater." 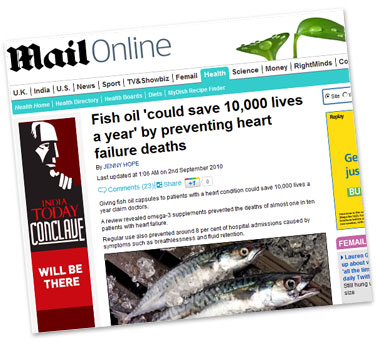 Fish oil 'could save 10,000 lives a year' by preventing heart failure deaths

Giving fish oil capsules to patients with a heart condition could save 10,000 lives a year claim doctors.

A review revealed omega-3 supplements prevented the deaths of almost one in ten patients with heart failure. Regular use also prevented around 8 per cent of hospital admissions caused by symptoms such as breathlessness and fluid retention. The benefits reached a peak two years after taking the capsules.

British cardiologists say international guidelines are now being rewritten to advise that heart failure patients take a daily dose. This is likely to mean government guidance also changes to recommend the use of 51p a day Omacor capsules on the NHS.

Around 500,000 prescriptions were written last year for Omacor, a pharmacy-only medicine that cannot be bought in health food shops.

Around 700,000 Britons suffer from heart failure, 68,000 new cases are diagnosed each year and it is thought to kill 100,000 a year. Survival rates are worse than for breast and prostate cancer. The review is published in the European Journal of Cardiovascular Medicine.

Altogether 7,000 heart failure patients taking part in a larger Italian study were monitored over fouranda half-years. There was a fall of 9 per cent in the death rate of those taking purified fish oil, and an 8 per cent fall in hospitalisation rates.

Review author Professor Martin Cowie, speaking at the European Society of Cardiology congress in Stockholm yesterday, said that if 500,000 patients took supplements regularly around 10,000 lives a year might eventually be saved. And he expected ESC guidelines to recommend their use in heart failure in the 'near future'.

In the UK the National Institute for Health and Clinical Excellence, recommends supplements on the NHS to prevent a second heart attack.

Professor Cowie, of Imperial College London and the Royal Brompton Hospital, said he believed the latest evidence would convince NICE that heart patients should also get them

Omega-3 fatty acids are natural polyunsaturates found in oily fish, soya beans, rapeseed oil, flaxseed, pumpkin seeds and walnuts. The fats are important throughout adult life for mental wellbeing but in particular help heart patients - and those with arthritis - by blocking the body's response to inflammation, cutting blood fats, reducing the chances of a blood clot and blocking dangerous heart rhythms.