Home
ElderMax - In the press 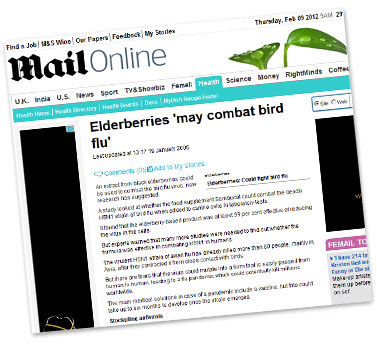 An extract from black elderberries could be used to combat the bird flu virus, new research has suggested.

A study looked at whether the food supplement containing black elderberry could combat the deadly H5N1 strain of bird flu when added to canine cells in laboratory tests. It found that the elderberry-based product was at least 99 per cent effective at reducing the virus in the cells. But experts warned that many more studies were needed to find out whether the formula was effective in combating H5N1 in humans.

The virulent H5N1 strain of avian flu has already killed more than 80 people, mainly in Asia, after they contracted it from close contact with birds. But there are fears that the virus could mutate into a form that is easily passed from human to human, leading to a flu pandemic which could potentially kill millions worldwide.

The main medical solutions in case of a pandemic include a vaccine, but this could take up to six months to develop once the strain emerges.

Countries around the world are stockpiling antiviral drugs which can reduce the length and severity of flu symptoms.

The latest study by Retroscreen, which is affiliated to the University of London, looked at how effective the elderberry extract was in combating H5N1 infections in dog kidney cells. The formula was added to the infected cells and compared with samples which were just allowed to incubate the virus. The researchers found that black elderberry was effective in significantly neutralising the virus infections in the cell cultures.

Dr Madeleine Mumcuoglu, who developed the formula using the secret ingredient from elderberries, said that studies also showed that black elderberry could combat the ordinary winter flu. "The flu virus cannot replicate by itself. It must do so inside a living cell. "It binds to cells via hemagglutin on the virus surface. Black elderberry blocks the hemagglutin and prevents the entry of the virus into cells," she said. 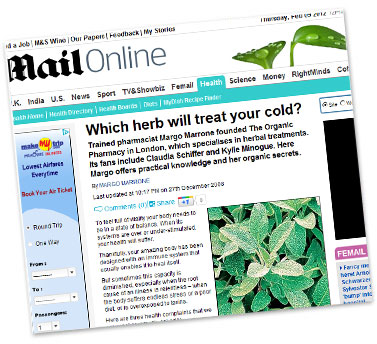 Which herb will treat your cold? Health Article: Daily Mail 2006

To feel full of vitality your body needs to be in a state of balance. When its systems are over or under-stimulated, your health will suffer. Thankfully, your amazing body has been designed with an immune system that usually enables it to heal itself. But sometimes this capacity is diminished, especially when the root cause of an illness is relentless ? when the body suffers endless stress or a poor diet, or is overexposed to toxins.

A cold is a viral infection in the upper respiratory tract caused by one of 120 viruses known as rhinoviruses. Influenza is also a virus and has similar symptoms, often more severe.

Cold symptoms include a headache, sore throat, cough, running or blocked nose, sinus pain and tiredness. Flu usually has all of these symptoms and also eye ache, glandular swelling and melancholy. It is important to treat the virus but also vital to strengthen the immune system against the infection.

Vitamin C: Helps improve immunity by increasing the production of the virus-inhibitor interferon, as well as other immune cells.

Zinc: The antiviral and antioxidant is crucial for the function of immune cells.

Bacteria and viruses surround us. A healthy immune system is generally able to fight off these pathogens, but many factors (including stress, overwork and toxicity), coupled with a poor diet high in sugars and additives and low in nutrients, compromise immunity, making us susceptible to illness