Home
CranberryMax - in the Press 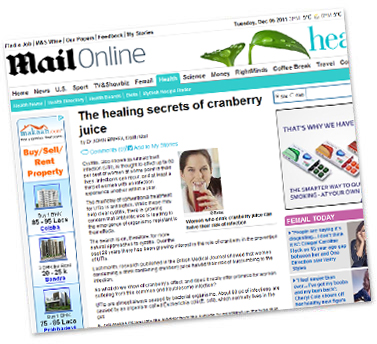 The Healing Secrets Of Cranberry Juice

Cystitis, also known as urinary tract infection (UTI), is thought to affect up to 60 per cent of women at some point in their lives. Infections can recur, and at least a third of women with an infection experience another within a year.

The mainstay of conventional treatment for UTIs is antibiotics. While these may help clear cystitis, there is growing concern that antibiotic use is leading to the emergence of organisms resistant to their effects. The search is on, therefore, for more natural approaches to cystitis. Over the past 20 years there has been growing interest in the role of cranberry in the prevention of UTIs.

Last month, research published in the British Medical Journal showed that women consuming a drink containing cranberry juice halved their risk of succumbing to the infection. 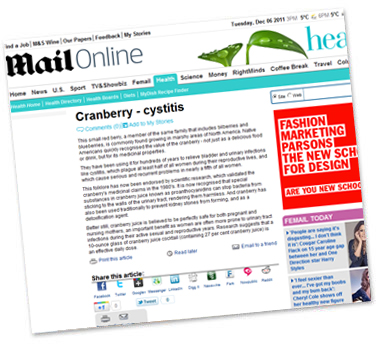 It is now recognised that special substances in cranberry juice known as proanthocyanidins can stop bacteria from sticking to the walls of the urinary tract, rendering them harmless. And cranberry has also been used traditionally to prevent kidney stones from forming, and as a detoxification agent.

Better still, cranberry juice is believed to be perfectly safe for both pregnant and nursing mothers, an important benefit as women are often more prone to urinary tract infections during their active sexual and reproductive years. Research suggests that a 10-ounce glass of cranberry juice cocktail (containing 27 per cent cranberry juice) is an effective daily dose. 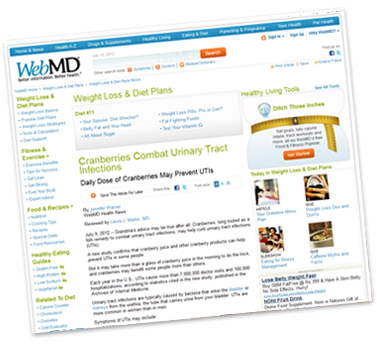 Each year in the U.S., UTIs cause more than 7,000,000 doctor visits and 100,000 hospitalizations, according to statistics cited in the new study, published in the Archives of Internal Medicine.

Urinary tract infections are typically caused by bacteria that enter the bladder or kidneys from the urethra, the tube that carries urine from your bladder. UTIs are more common in women than in men.

Symptoms of UTIs may include: Pain or burning during urination, frequent urination, tenderness in the belly, foul-smelling or cloudy urine, fever and chills, nausea and vomiting.

For the study, researchers evaluated the effectiveness of cranberries in preventing UTIs in 13 studies involving more than 1,600 people. Overall, the results showed that UTIs were 38% rarer among people who used cranberry products (juice or supplements) than those who didn't. Cranberry products were found to be more effective in preventing UTIs in certain groups of people. 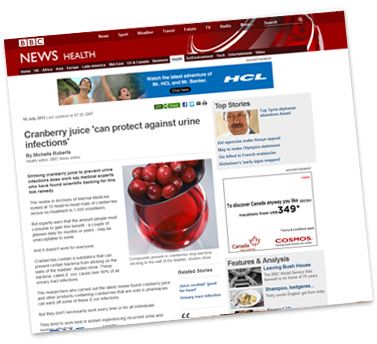 Drinking cranberry juice to prevent urine infections does work say medical experts who have found scientific backing for this folk remedy. The review in Archives of Internal Medicine looked at 10 head-to-head trials of cranberries versus no treatment in 1,500 volunteers. But experts warn that the amount people must consume to gain this benefit - a couple of glasses daily for months or years - may be unacceptable to some. And it doesn't work for everyone.

Cranberries contain a substance that can prevent certain bacteria from sticking on the walls of the bladder, studies show. These bacteria, called E. coli, cause over 80% of all urinary tract infections.

The researchers who carried out the latest review found cranberry juice and other products containing cranberries that are sold in pharmacies can ward off some of these E.coli infections. But they don't necessarily work every time or for all individuals. They tend to work best in women experiencing recurrent urine and bladder infections. Cranberry products were found to be more effective in preventing UTIs in certain groups of people.

Laboratory studies have shown the anti-adhesion activity of cranberry on bladder bacteria lasts for around eight hours after ingestion, which suggests a few doses a day might be ideal. But since cranberry juice has a high sugar content, this might not be advisable for general health.

In one of the 10 studies the researchers looked at the dose had to be reduced because many of the women participating in the trial disliked drinking three glasses of the juice every day.

Dr Ruth Jepson of the University of Stirling has been carrying out a similar review into cranberry juice. She said: "I'm not sure how many of us would want to be drinking this every day for an indeterminate amount of time. It can be costly and calorific and some people just don't like the taste of it."

Doctors advise people with urinary tract infections to drink plenty of fluid and the problem will usually get better on its own. They may recommend a course of antibiotics. Cranberry can interact dangerously with warfarin medication, so patients on this blood-thinning drug are advised to avoid cranberry products.