Home
CherryFlex - In The Press 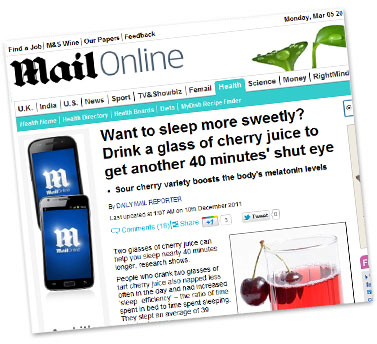 Want to sleep more sweetly? Drink a glass of cherry juice to get another 40 minutes' shut eye!

People who drank two glasses of tart cherry juice also napped less often in the day and had increased 'sleep efficiency' ? the ratio of time spent in bed to time spent sleeping. They slept an average of 39 minutes longer.

Researchers found that Montmorency cherry juice ? a variety of sour cherry ? significantly increases the body's level of melatonin, a powerful antioxidant that is critical in regulating sleep.

The 20 participants were given two 30ml servings of the juice diluted with half a pint of water, or an alternative fruit drink, for seven days ? once when they woke up and another before bed.

The researchers at Northumbria University, whose findings were published in the European Journal of Nutrition, then tracked their sleep habits using actigraphs ? watches that sense movement ? and sleep diaries.

They found that healthy adults who had two daily glasses of the juice had longer sleep time, less daytime napping and up to a 6 per cent increase in sleep efficiency.

Researcher Jason Ellis said: 'When darkness falls, the body produces melatonin to signal it is time to sleep. The juice provides an additional service to what we already have to strengthen the internal signal of the body clock.'

'It would definitely be beneficial to people with jet lag or coming off shift work ? anywhere your internal clock has been fighting the external world.' 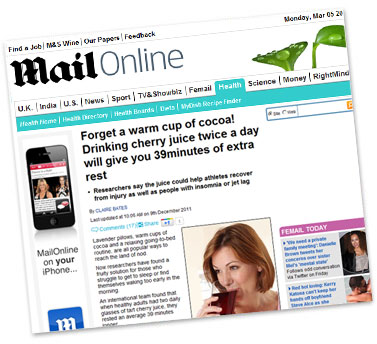 Forget a warm cup of cocoa! Drinking cherry juice twice a day will give you 39 minutes of extra rest

Researchers say the juice could help athletes recover from injury as well as people with insomnia or jet lag.

An international team found that when healthy adults had two daily glasses of tart cherry juice, they rested an average 39 minutes longer.

This broke down as around 25 minutes of extra sleep and 14 more minutes spent relaxing in bed.They also found they woke less often when in bed compared to when they drank a non-cherry fruit cocktail.

The study was conducted at Northumbria University and has now appeared in the European Journal of Nutrition. Participants were given two servings of Montmorency cherry juice concentrate diluted with half a pint of water, or an alternative fruit drink for seven consecutive days - once when they woke up and another before bed. They were also asked to abstain from eating a list of foods, known to contain or influence melatonin - a powerful antioxidant that is key to regulating our sleep-wake cycles.

The researchers then tracked their sleeping habits using actigraphs (watches that sense movement) and questionnaires. Urine samples were taken to measure the levels of melatonin in the system. They found the cherry drink led to longer sleep time, less daytime napping and better sleep efficiency (the ratio of time spent in bed to time spent sleeping) among the 20 participants. The researchers attribute the sleep benefits to the melatonin content of the red fruit.

Each serving of the tart cherry juice concentrate was estimated to contain the equivalent of 90 ? 100 tart cherries, which 'significantly elevated' the level of melatonin in the bodies of the participants.

Dr Glyn Howatson, an exercise physiologist, said: 'We were initially interested in the application of tart cherries in recovery from strenuous exercise. 'Sleep forms a critical component in that recovery process, which is often forgotten. These results show that tart cherry juice concentrate can be used to facilitate sleep in healthy adults and, excitingly, has the potential to be applied as a natural intervention, not only to athletes, but to other populations with insomnia and general disturbed sleep from shift work or jet lag.'It is thought that a third of people in the UK will experience bouts of insomnia during their lives. The condition, which is classed as being unable to get to sleep or stay asleep long enough to feel refreshed the next day, is more common among women and older people. While more research is necessary before medical professionals turn to cherries as a sole treatment for sleep disorders, the scientists conclude that tart cherry juice concentrate could be a viable 'adjunct intervention for disturbed sleep across a number of scenarios.'

Have a cherry good night's sleep: The natural remedies that can beat insomnia without the side effects of medicines

Britain has become a nation of sleeping-pill-poppers. Stress-related insomnia has been blamed for a sharp increase in the number of people prescribed powerful drugs to help them sleep, with 15.3million prescriptions handed out for sleeping pills last year, costing the NHS almost È50 million.

A third of adults will suffer insomnia at some point but there are fears that strong medication is being given out too readily and that patients are becoming hooked.

Many medicines have potentially dangerous side effects, including liver problems, headaches and nausea. Yet there are natural remedies that are proving remarkably effective in clinical trials, without the same complications.

A 2010 study found that drinking a glass of unsweetened cherry juice in the morning and evening helped improve sleep.

Volunteers drank 30ml of either Montmorency cherry juice concentrate or a placebo juice twice a day for seven days. Participants wore sensors that monitored their sleep-wake cycles and kept a daily diary on their sleeping patterns. Those who had the cherry juice saw an increase of 25 minutes in their total sleep time and a six per cent increase in sleep quality.